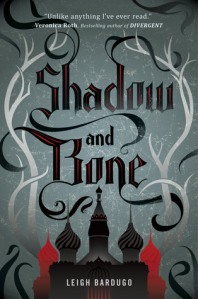 This is the first book review I've done on this blog. I never intended to do any (I have a strong opinion that writers, for the most part, should not be public reviewers), but Shadow and Bone by Leigh Bardugo was so fabulous, I couldn't resist!

Honestly, like Veronica Roth's blurb says on the cover, I've never read anything quite like this before. A Twitter friend asked me for some recommendations in a similar vein and it took me a long time to think of any--and still they're only kinda-sorta like this book.

Here's why I loved Shadow and Bone:

Leigh Bardugo trusted the reader. She threw a ton at us in the first few chapters: a large cast of characters, an impressive vocabulary of foreign words we needed to understand, a new world, and many factions of the Grisha--the magically elite members of the Second Army and masters of the Small Science. I'll admit I was a little dizzy at times trying to absorb it all, and I questioned more than once the rate the author expected the reader to keep up. But when I really needed to understand the importance of a new term, place, or character, I did. The story kept barreling forward past all the initial setup, and in act two I was able to breathe, dig in, and feel comfortably familiar with the world. After having read the whole novel, I wouldn't change a thing the author did to get this premise-heavy story started. And she did all of this while keeping me grounded in caring about the character. A huge feat!

The prologue worked. One of the most gorgeously written sections of this novel was the prologue. And it wasn't a lazy work of convenience to drop in all the worldbuilding. In fact, the prologue didn't focus on the worldbuilding; it focused on story, character, and setting the mood for this dark and poignant novel. And the prologue tied in perfectly with the last chapter, giving the story a resonant and full-circle resolution that made me sigh with the pleasure of my reading time well spent.

The plot kept me guessing. About halfway through the novel, my jaw dropped on the floor and remained there until the end. I didn't predict any of the plot twists, but when they happened, I could see they were inevitable--which is exactly what an author should strive to do!

I got to take this ride with some awesome characters. Alina Starkhov begins the story as a weak character in many ways, but she could never be brushed off as passive. She's scrawny, but feisty. She speaks her mind, even when it puts her foot in her mouth with higher ranking individuals. She's strong and stubborn, but seeking for a place to belong. And this novel is about that in so many ways--how far someone will go to belong to someone or something, especially when they never had a home to begin with. I made the same choices along the way with Alina, felt just as justified as she did with her actions, and then I was horrified and felt just as stupid and shamed to have made the same mistakes. Reading this novel really was a roller coaster of emotions for me. Other fabulous characters were Mal, Alina's best friend and the orphan she was raised with, and the Darkling--one of my favorite characters of all time. He was subtle and sexy and primal and awe-inspiring and mysterious...and I could go on and on. All I have to say is, the author is brilliant!

This book made me think. Yes, it was page-turning and tense and conflict-ridden and commercial, but the themes behind it all were so interesting and universal and executed in a fresh way. I'm still whirling with the intellectual journey this book took me on.

That's about all I can say without spoiling this read for you. I can't recommend Shadow and Bone highly enough! It's possibly my favorite book ever. Plus, I got to meet Leigh Bardugo on the Fierce Reads tour, and she was such a genuine and kind and down-to-earth person. I loved reading this story and thinking of the author who wrote it, whose imagination stretched so deeply and whose soul lay so bare on the pages.

What are some favorite books you've read lately?