The Next Big Thing

My critique partner, Taryn Albright, tagged me for "The Next Big Thing" blog interview hop. Since I've already blogged a lot about The Rowaness of Shalott, I thought I'd answer questions about my work-in-progress instead.

What is your working title of your book?
The Lovely Invisible

Where did the idea come from for the book?
This is a very loose retelling of the Cupid & Psyche myth, but still set in ancient Greece. I don't like how Psyche is a "wussy" in the myth, however. My Psyche, "Isidora," is much different. Her weakness is her intelligence, which leads to a lack of faith.

What genre does your book fall under?
YA fantasy

Which actors would you choose to play your characters in a movie rendition?
Ooh, my favorite question! I can't think of the right actress to play Isidora yet, but she will look something like this... 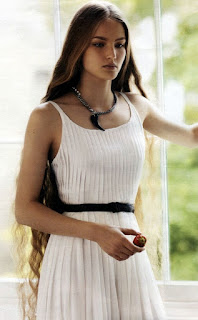 And the PERFECT actor to play Eros (Cupid) is Douglas Booth. If you saw him in the recent TV miniseries, Great Expectations, you'd know he's not only is he swoonworthy, but also an amazing actor! 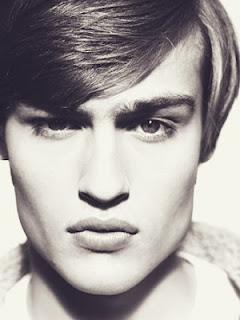 What is the one-sentence synopsis of your book? (I'm cheating with two.)
To regain her right to rule, eighteen-year-old Queen Isidora must marry one of three preselected suitors; however, the man she is drawn to isn't one of the three--or like them at all. He is invisible.


How long did it take you to write the first draft of your manuscript? May we see an intro?
I started writing it in July, and I'm about halfway through. I'm hoping to finish the draft by November. (This story requires LOTS of research.)

I stared at the face of the god of love, not the polished bronze mirror balanced on his wings.

“You will look,” Nuri, said as she tilted up my chin with her small brown fingers.

I kept my eyes fastened on the marble god. His mouth was sculpted in such a way I couldn’t determine whether he was scowling or smirking at me.

Shaking her head, Nuri clucked her tongue. “You shame the patron goddess.”

I wriggled my chin from her grasp. “I thought the virginal white was an appropriate choice.”

“Don’t try and fool me, Isidora. I’ve been in your service since the day you were weaned. You chose the white because it’s plain.” Nuri grabbed a fistful of my long robe as if it were evidence worthy of banishment.

I sighed and glanced at the foot of the mirror, where three rolls of newly delivered papyri lay waiting to be read. I wanted this day to be over. I wanted to curl into a quiet corner of the palace and read about the strange fire and water machine that opened temple doors in Athens, the paved slipway near Corinth, the controversial prose of the female poet, Sappho. “Why should I draw attention to myself on Procession Day?” I asked Nuri. “The glory should go to the goddess.”

The marble god below the mirror was definitely scowling at me now. He heard my lie as well as my maid: I cared nothing for the glory of Aphrodite.

What other books would you compare this story to within your genre?
Ha! I have no idea. It's a character-driven fantasy in the vein of Kristin Cashore, Leigh Bardugo, and Cinda Williams Chima.

Who or what inspired you to write this book?
My longtime love of Greek mythology, and the themes of faith and doubt in the Cupid & Psyche myth--mixed with falling in love, of course. :-) I also drew from stories of strong historical young queens, especially Elizabeth I, Victoria, and Jane, the nine-days queen of England. And when I visited France, I saw the statue, Psyche Revived by Cupid's Kiss, by the sculptor, Canova. It was my favorite piece of art in the Louvre, and one of the most beautiful things I've ever seen. This picture does not do justice! 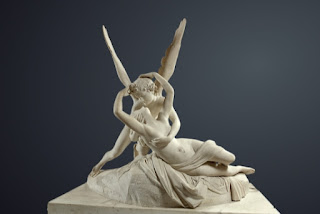 What else about your book might pique the reader’s interest?
One of my critique partners said my story was like The Bachelorette, but set in ancient Greece. :-)

Posted by Kathryn Purdie at 7:00 AM