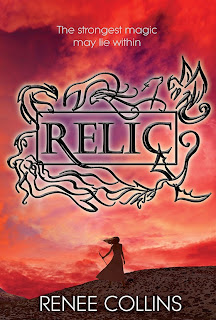 That's right. I'm giving away a Relic! *laughs at my little joke* I found it so funny when I was at The King's English last week and walked up to the counter where stacks of Renee Collin's beautiful new book were waiting for customers in preparation for her signing. My friends and I took turns ordering. "I'd like a Relic." "I'd like two Relics." Maybe I was the only one giggling about this, I don't know.

Anyway, as luck would have it, I won an extra Relic! It's a rare ARC. Let me hear those ooohs and aaahs. And I have a Griffin card to go along with it. You should know that Griffin is a type of magical relic in Renee's awesome alternate western YA fantasy. Griffin relics allow the wielder to manipulate the air around an object so they can move it. Want to more? Win my raffle. Or better yet, buy the book and read it for yourself. (But you should still enter my raffle.)

How do you enter this raffle, you ask? You leave a comment. That's it. I'm easy. If you're feeling extra cool, you can tell me what kind of relic you'd want, if any kind of relic were possible. To spark some ideas, I can tell you some of the relics in Renee's book allow you to breathe underwater or become invisible. EDIT: Please leave your email address in your comment so I know how to reach you. You can write it all cryptic-like so the evil minions of the Internet don't exploit your information (i.e., johnsmith AT gmail DOT com, or whatever).

So let's do this! Have your comment entries in by Tuesday, September 24th, and I'll announce the random winner the next morning. This contest is limited to people in the U.S. Sorry, international folks. I'm poor. Here's a pretty pic of what you will win, followed by more info on Renee's book (she read the first chapter aloud at her party, and WOW), and fun pics from her signing. 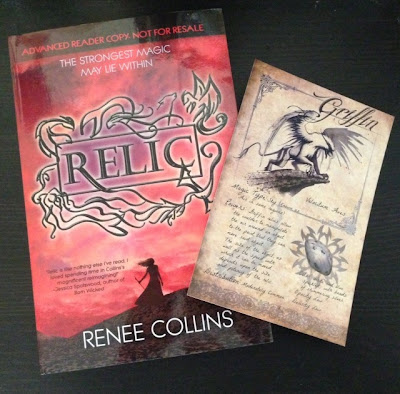 After a raging fire consumes her town and kills her parents, Maggie Davis is on her own to protect her younger sister and survive the best she can in the Colorado town of Burning Mesa. In Maggie’s world, the bones of long-extinct magical creatures such as dragons and sirens are mined and traded for their residual magical elements, and harnessing these relics’ powers allows the user to wield fire, turn invisible, or heal even the worst of injuries.

When she proves to have a particular skill at harnessing the relics’ powers, Maggie is whisked away to be trained in the world of relic magic. But when mysterious fires reappear in neighboring towns, Maggie finds she must use her powers to discover who is channeling relic magic for evil before it's too late.

Posted by Kathryn Purdie at 5:30 PM