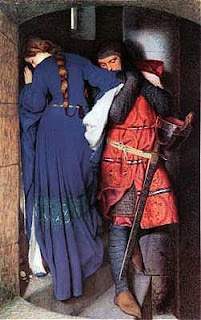 So most my crit partners have now read The Rowaness of Shalott. I read it myself after two months' distance (and before reading their critiques). Most of their comments were in line with things I also saw when I read, but the biggest shocker came from one of my best friends (also a crit partner).

WHAT?!!! How could she hate Lancelot? Impossible!


The feedback I've gotten from other readers/crit partners so far is that they love both Lancelot and Arthur, which is what I wanted. I love them equally, though I know who Guinevere will end up with at the end of my trilogy. I've written both men very differently. Arthur is perfect (which ends up being a flaw) and Lancelot isn't (which compels me to him). I naively thought that every reader would follow Guinevere's story and fall in love with each man when she did.

I was very, very wrong.

This is the joy of love triangles, and after a weekend of being very hurt and angry, I've realized a few things, talked to several people, and come away with some insights.

Guess what? When you write a love triangle, you inadvertently ask your readers to love one interest more than the other. To what degree they love the one, they often hate the other in an equal measure.

Let's take Twilight, for example. I hate Jacob. Hate him. But I suddenly like him during the second half of Breaking Dawn. I realized this was because he was no longer a threat to Bella and Edward's relationship. I could give you paragraphs of valid reasons why I hated Jacob before, but fundamentally, it came down to fact that he was not Edward and was standing in the way of him.

There are some books, however, that I like both love interests (though I still have a favorite). Unearthly and Matched come to mind. But anytime I truly, madly, deeply fall in love with a love interest, I HATE the rival.

Cassandra Clare says your readers should be split down the middle with which love interest they prefer in a love triangle. The stronger they hate and love the other is a GOOD SIGN your story is working.

Now I'll admit love triangles annoy me to no end when they're the typical both-boys-fighting-over-the-girl-and-oh-dear-who-will-she-choose variety. You start hating the girl for being wishy-washy, bouncing back and forth between them. But love triangles can be very effective story tools. Cassandra Clare says if the two boys have a solid friendship, that makes things more interesting (Arthur and Lancelot are best friends, so check). It also makes things more interesting (according to me) if both boys AREN'T fighting for the girl. If they're confused whether they love her or not in the first place. All right, that's all I'm going to spill about my story. The point is, love triangles do have their place in literature AND can be very compelling.

One of the panels I attended at LTUE was on fractured fairy tales. The authors agreed that the reason they fracture a fairy tale is usually because they hated the original or something about it. This is true for me with the Arthurian legends. I dislike how the love triangle is often handled between Arthur, Guinevere and Lancelot. And so The Rowaness of Shalott was born.

I've realized that as I writer I need to let my book communicate in whatever way it will for my readers. I can write, revise and polish all I want, but in the end, not everyone's going to like my story or all of my characters. This friend who hated Lancelot, loved two other characters who none of my other readers have liked so far. Is she right or wrong? It doesn't matter. She is having her own valid experience with my book, and she should be allowed that. Every reader should be. It breaks my heart that she hates Lancelot because I know I won't change him (and because I wanted this close friend to enjoy him). But for my purposes as a writer, he is everything I want him to be. (But my friend loves Arthur. So that's something to be happy about.)

Little did I know what I was getting myself into with writing this love triangle. But now I've gotten a taste for what to expect, I'm more prepared.

*skips away to make Team Lancelot and Team Arthur t-shirts*

For more thoughts on love triangles, visit my awesome crit partner's blog post. (For the record, Ilima loved both Arthur and Lancelot.)

Also, a shout out goes to another crit partner, Taryn, who just signed with agent Vickie Motter. Taryn is a mad genius and we all live vicariously through her. Congrats, Taryn! (Time will tell if she likes Arthur and Lancelot. I'll send her the second draft of Rowaness...hopefully minus 40,000 words.)
Posted by Kathryn Purdie at 3:55 PM

Email ThisBlogThis!Share to TwitterShare to FacebookShare to Pinterest
Labels: love triangles, revisions, The Rowaness of Shalott