Confessions of an Overwriter

When I finished the draft of my novel in December, it clocked it at about 140,000 words. Yipes! But it is a fantasy, there is necessary worldbuilding, and it is the first book in a trilogy. Still...140,000 words! I've been told all along my novel needs to be under 100k for YA, and as I typed those last few chapters I was cringing. "No, no, no...end NOW, novel!" But it wouldn't mind me. I finally gave in, realizing I had to get all the words out of me, then I'd come back, revise and chop, chop, chop.

But in my two months' distance from my novel, I started to worry. I mean, what could I possibly cut from my plot? I already kept my cast of characters fairly small. Cut I cut any more? I was confident, at least, that deleting 10k wouldn't be a big deal, but 40k? Ouch.

So as strange as it sounds, when I read my lengthy novel over four days--and really got a sense of the pacing as a whole--it made me CRAZY HAPPY to see I had plenty...PLENTY of raw material to work with for cutting!

Yes, folks, I am an overwriter. I've known this from the beginning, but now I see more clearly where I overwrite. These are the areas where I'm especially guilty: 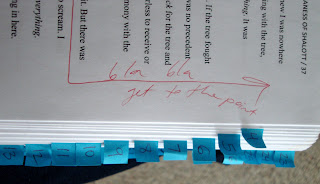 There are two kinds of writers: put-er-in-ers and taker-out-ers. You know what kind you are when it comes to revision. I am obviously a take-er-out-er. But, hey, half the battle is recognizing the problem, right? (The other half is doing something about it.) I'd certainly be in trouble if I submitted a bloated manuscript to an agent. That's why we writers get the beautiful opportunity of a second chance...and third, fourth...gazillionth. We can revise, thank goodness. (And don't worry, future readers, you won't have to read 140,000 words! By the time I'm done, this will be a tight and shiny story; I've already cut half of what I've written in the first three chapters, and the pacing rocks!)

The beauty of overwriting is that in getting nearly every single idea out of me and onto paper, it's easy to find the gems in the writing--the gems that wouldn't be there had I not overthought the subject to such an extent. So in revising, I go back, keep the gems and nix most of the rest.

For me, overwriting is just a part of the process. Maybe it's not a weakness; maybe it's a strength. Or maybe it's just the way I work. Things I do feel confident about with this first draft are my characters and my plot. Sure, they still need some tweaking, but at least those things aren't going to need a major rehaul. I'll be busy enough condensing my novel! 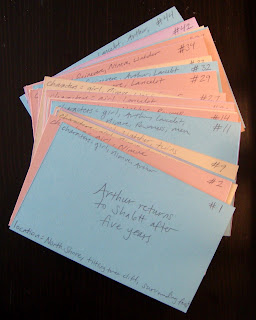 I made note cards for every chapter in my book. On the front of the card, I wrote a very brief description of the action in the chapter (in a nutshell, what happens). I also listed the characters involved and the location.

On the back of the note card, I made two columns. The first column listed my three Os: Objective, Obstacle, and Outcome. My character has to want something, something has to get in her way, and there needs to be an outcome--usually NOT what she wants to keep the overall conflict going in the novel. (And, really, every character in the chapter needs three O's as well, so I have to keep those in the back of my mind--because there's no more room on my note card!).

In the second column on the back of the note card are key points of the chapter. These are usually bits of information the reader needs to learn during this time, like pieces of exposition, back story, important plot points, meeting new characters, etc. Once I have this completed note card, I have a focused picture of what this chapter needs to be. Anything beyond it is fluff and in serious danger of my revision battle ax!

When it comes to revisions, are you a put-er-in-er or a take-er-out-er? What kinds of things do you put in or take out? How do you tackle revisions?

Edit: I just read on Kristin Cashore's blog (author of Graceling) that her first draft of Bitterblue (soon-to-be released) was 216,000 words, 800 pages! The will-be published version (seven drafts later) is 550 pages. I feel so much better!
Posted by Kathryn Purdie at 3:06 PM

Email ThisBlogThis!Share to TwitterShare to FacebookShare to Pinterest
Labels: revisions, The Rowaness of Shalott, writing tips