Why Do We Torture Ourselves? 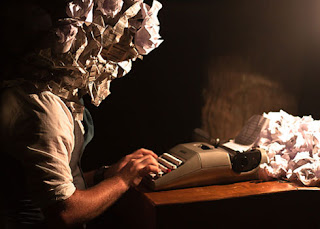 Ever since I finished my mega revision last week, I've been TIRED. The day after Christmas tired. The just got home from Disneyland tired. The sleep for twelve hours and still take two naps during the day tired. (Yes, I did that today.)

I've thought a lot about why we writers do this to ourselves. Writing a novel isn't a picnic in the park, a dreamy thing you do while sitting in a flowered meadow while the words come flowing to your brain. Like any form of creation, it is a violent act. Light ripping apart from darkness. Division in the mind, the heart. It makes you question everything you thought you believed in. It exposes all your weaknesses. Sometimes you feel like you are everything. Sometimes, like nothing. These fictional characters have a will as fierce as your own. They demand their stories be told, no matter how busy you are, how sleep deprived.

So why go through with it when writing is, in fact, a very effective form of torture?

I started writing this novel during the busiest, most stressful and inconvenient time of my life. I had just donated a kidney and, though I'd finished recovering physically from the experience, my emotions were still working their way back up. It didn't helped that I'd just moved across the country. Everything was different. My husband was working a job where he was gone night and day. I felt like a single mother raising three young children. Nothing "bad" was happening, but my mind was exhausted to the point where I was crying like a leaky faucet for several hours a day. Not sobbing...not even sad...just overwhelmed. Drip, drip, drip. I couldn't turn it off.

Then I got that crazy idea. The one that said, "Hey, you should write a book." What was I thinking? I have absolutely no idea.

But guess what? In the act of adding something new to my insane life--more importantly, of CREATING something, something I could control (or so I thought until I met my characters)--I began to feel...better. Because I was doing something. Yes, I'd been doing plenty of things, but now I was doing something that spoke to that part deep inside me that seemed to be wondering if I'd forgotten all about her.

So I got to know her more.

She's a bit of a beast, that deep-buried Katie. She's wildly sensitive, quick-tempered, emotional and curious. She frightens me sometimes. But we're becoming better friends. I think I can live with this girl.

She is why I push myself beyond my seemingly impossible limits. Why I crash and burn after imposing crazy deadlines on myself. Why I agonize over perfecting pages, sentences, word counts, verbs.

Sometimes I wonder if it's worth it...all the torture. I will think I need a long relaxing break. But then after a nap or a bowl of ice cream, that inner Katie pokes her head up and says, "All right, girl. I'm ready for some more. Let's do it." I smile and sigh and say, "Okay."

So, dear writer friends, tell me, why do you write? What drives you to push through the madness?
Posted by Kathryn Purdie at 8:15 PM